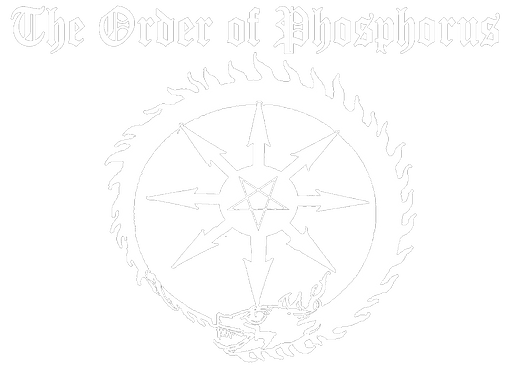 THE ORDER OF PHOSPHORUS

The Order of Phosphorus is an international society of Luciferian Adepts, Black Magickans, Satanists, and other Left-Hand Path adherents who compose the membership of TOPH. The members of this Luciferian Order are autonomous initiates who are self-motivated practitioners of Luciferian Magick. The recension of the ever-expanding teachings of Luciferianism is published in the primary collection of works, namely, "Apotheosis", "The Bible of the Adversary", "Goetia of Shadows", "Fallen Angels - Watchers and the Witches Sabbat", "Dragon of the Two Flames", "Hecate & the Black Arts", "Necrominon - Egyptian Sethanic Magick", "Sebitti", "Demons of Solomon", "Akhkharu" and more.

The Order of Phosphorus (TOPH) is an initiatic body of the Luciferian Tradition presented in the works of Michael W. Ford and associated Adepts. The Luciferian Tradition is founded on several key texts which define the philosophy and specialized corpus of magickial practice known commonly as the “Adversarial Path”, “Adversarial Current” and “Luciferian Magick”. The Tradition itself is derived from numerous sorcerous traditions and specialized arts which allow the teachings, symbols and integration of the seeker towards the wisdom and power within the Luciferian Path.

The Adversary is firstly a symbol or a “Deific Mask” of numerous yet unique manifestations; representing energies inherent in both nature and within the individual. TOPH utilizes a connected and structured system to actually apply Luciferian philosophy and dive the depths of darkness and ascend as a unique bringer of light, shaping the path you wish to take in this life. Luciferian Witchcraft and Adversarial Magick are the tools in which the initiate utilizes in their own unique way to manifest short and long term desires and goals.

The corpus of magickial knowledge is transmitted to the initiate in a challenging way which must be fully experienced before formal initiation begins. The initiate attains the knowledge, insight and power to become the very center of their world; responsible for successes and shortcomings. The magickial transmission of the Adversarial Current is uniquely experienced by the initiate by the alchemical illumination of the infernal and empyrean powers. The initiate creates and recognizes the power of the unconscious, primal mind and understands it as “Leviathan”, the crooked and coiling serpent of watery chaos.

This is the center and foundation of all that drives you with dark desires, passions and the predatory instincts; this is symbolized as the circle of the self, which your awakening shall occur. In this Leviathanic Circle, the Infernal Union of the linage of Samael and Lilith ignite your daemonic consciousness in the forge of self; like the Watchers of our Luciferian Tradition, the spark ignites into the Black Flame incarnated as what may be known as Baphomet, the Beast or Cain the symbolic veil of the mystery of the idealized sorcerer.

The present work of TOPH

The initiates of TOPH are a autonomous body of individuals who seek knowledge and power according to their predilection, within various structures of magical disciplines. This includes activities which include covens, lodges or solitary practices.

The primary goals of TOPH, in its present representation, is understood as a foundation and path of magickial instruction for the individual who has applied the Luciferian philosophy as defined in “Wisdom of Eosphoros”, called individually to the Adversarial Current through the sorcery of the Luciferian Witchcraft Tradition. There are several and varying foundations with the primary few being the Grimoire’s “Adversarial Light – Magick of the Nephilim”, “Bible of the Adversary”, “Dragon of the Two Flames” and “Drauga – Ahrimanian Yatuk Dinoih”. Each initiatic stream is different and should be explored based on the natural attraction of the sorcerer; with a basic structure found in the Grade 0 course book. In accordance with the protean spirit of the Luciferian Tradition, initiates formulate often unique manifestations of the Luciferian Tradition; all as paths to self-empowerment and the continual evolution towards the True Will (Daemon) and manifesting the spirit to the benefit of the Adept and TOPH.

To inquire about TOPH Membersip see the Link Below